Welcome
Welcome to New Era! A Roleplaying Site based on the Fiction book series Warriors, by Erin Hunter. This is a place where members can let their creativity flow, meet new friends and have fun! The clans moved to a new territory and have fanned out into different parts of lands, claiming it as their own. And now it’s time for a new generation of warriors to lead the clans on their quest of survival! You can make a character, join a clan and start roleplaying in the threads of that clan! Battle against other clans or tribes and protect your territory from trespassers and pesky twolegs. The possibility is endless at New Era!
Affiliates

Personality: (Long Description)
Cheerful, happy. and social are just a couple things to describe this she-cat. She is always happy no matter what happens, which is both a plus and a negetive for her as sometimes it gives people the wrong message of how she acts. The most thing though is that she loves being social and talking to someone, even if they aren't in the mood too. Sometimes she can be considered too social as she sometimes gets into other cats personal space. Burnt of course doesn't know this of course and continues on talking to that cat. Also she is always suspicious of newcomers even though she is very social, its takes a little bit and a long time of being around this she-cat to get used to her. However though, if you are her clanmate, then that is very different because she will trust you with her life. Which can both be good and bad at the say time which means she can quite gullible. As any other warrior, she would lay her life down for her clan and hoped that the rest of the clan would do the same.

Appearance: (Long Description)
As any typical Windclanner, her stature consists of being very slim which fuels her speed. She considers herself the fastest and smartest cat in the clan as she is very good with battle strategies. Thanks to her small frame though, she is a long distance fighter and doesn't like fighting close up to larger cats. She isn't like any other red tabby though, she isn't all red with just a couple white spots, she is just a few specks of red and while the rest of her body is the color of snow. Unlike other petty cats that like to groom their fur constantly, she is somewhat of a tom-boy as she likes to get the job done no matter what. Her tail is a mixture of both red and white, the same goes for the rest of her body. Her size though is a average Windclanner as she is neither large or small, instead she is in the middle of that, which means she is still a force to be reckoned with. Moving up her features, we come to her face where she has a red and white mask covering most of her face. The white coloration covers her muzzle, while the red covers her eyes, ears, and her cheeks as well. Then focusing closer, we look at the eyes that are attached to her skull. They consist of a amber/hazel coloration where it almost looks like a brown. She likes to express most of her emotions this way. 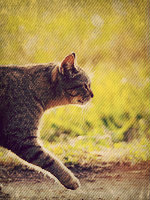